Can see some issues in the corners

This is the second part of a two part post, part 1 can be found here: Testing Mirrorless Cameras in Lembeh Strait Part 1

The second camera I used was the Olympus EM-1 in a Nauticam housing, which I coupled with two different lenses:  the 8mm fisheye wide angle and the 12-50 zoom lens along with the Nauticam SMC-1 diopter.  The first thing that I noticed about the Olympus system, compared to the Sony/Nikonos system, was that it was much smaller and lighter; it had more of the feel of a compact camera than the Sony system, which was a plus in my books.  Once again I used two Inon S-2000 strobes for the set up and I spent one day shooting wide angle with the 8mm Panasonic lens and two days with the 12-50 mm lens.

On the first day, I used the 8mm lens with the first dive at a true muck dive, Jahir, a black sand slope with good critter potential for shooting CFWA.  The first thing I did was take a few test shots of some still subjects in order to see how wide the fisheye was and how I would need to position my strobes to avoid backscatter.  It didn’t take me long to figure out that this lens is just as wide as the 10.5mm on a Nikon and that scatter and flash flare were going to be an issue just as they are with a 10.5mm.  (I note here that I was not a big fan of these small strobes for wide angle use, as a wider angle strobe like my usual Sea and Seas YS 120s would have been preferable, however, for the 12-50mm lens these strobes were great, lots of power in a small size)  The very small size of the camera and mini dome port allowed me to get as close as I wanted to my subjects (much closer than the 15mm) which gave me better creative control over composition for CFWA.  It was easy to get in close and position the strobes correctly as well, however, I would have preferred wider strobes as mentioned earlier.   Looking at the photos on my computer screen afterwards did reveal that there is certainly some corner distortion with the CFWA shots on a wider aperature such as f6.3 (look at the white eyed moray shot to see this).  It wasn’t as obvious on higher apertures and to be honest, didn’t really bug me too much on the shots that I did take, however, I would need to shoot more to see where I really stand on this.  (This is common with SLR and fisheye as well) 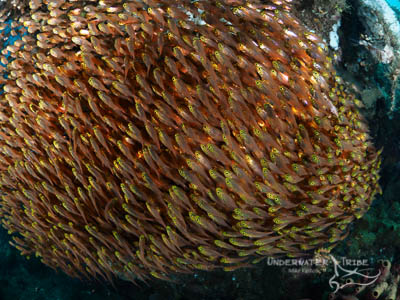 Corners were better at distance with 8mm

On the next dive I found a massive coral head that was covered in baitfish that were being preyed upon by several large lionfish, the perfect opportunity for a more classic wide angle photo.  I was much happier with these shots, taken from further away, but still shot between f5.6 – f8, as the distortion was not nearly as obvious in the corners.  This is not to say that this camera creates more or less distortion than my D7000 and 10.5mm, both have corner problems at less than f11 for close up work, but I would say the D7000 is marginally better in that aspect than the Olympus, but, not by much!  Overall, I was happy with the wide angle from this combination and would most definitely use it again, although with wider angled strobes. 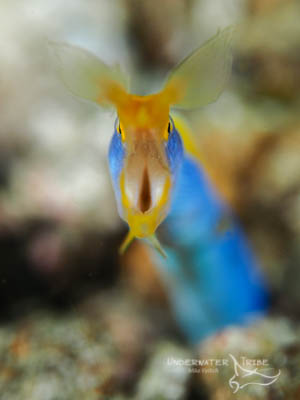 Focus was quick and accurate with 12-50mm

Next up was the 12-50mm lens and flat port for some “normal” shots of Lembeh critter diving.  I coupled this flat port with the Nauticam flip arm for the SMC-1 diopter in order to have an added punch of macro goodness for the small subjects that I was hoping to find.  What was really interesting about this lens and port combination was the ability to “turn on” macro mode with a simple twist of a dial.  The 12-50mm lens has a “macro” mode that allows the lens to focus very closely with it set at 43mm and the port has been designed to be able to access this function quickly and seamlessly by twisting a dial on the left side without having to manually tune the lens to that length or having to push a button to turn on the “macro” mode.  I found this to be a very cool feature of both the camera and housing, if I then wanted even more macro, I just had to swing the SMC-1 into place and I was good to go; this was a very simple and effective solution. Typically, I am not a big fan of composing through the screen on the back of a camera, especially for macro, as I find it very hard to see if what I want in focus is actually in focus; this is much easier with the viewfinder on an SLR where you are looking at the actual animal through the lens, as opposed to a screen.  On the Olympus, I was expecting to hate the focusing for macro due to this issue, however, it wasn’t nearly as bad as I was expecting.  The camera was able to lock focus very quickly and for the most part I was able to tell if the areas I wanted in focus were the ones that ended up in focus.

As an SLR user, I have always been a bit jealous of compact camera users who were able to zoom in and out at will as well as attach close up diopters or wide angle adaptors during a dive.  Using the EM-1 and 12-50mm with it’s native macro capability was a real eye opener for me, I found it to be a very versatile setup with the ability to shoot the eyeball of a wonderpus and then shoot a wide angle shot of it with the mere twist of a dial.  By adding on the SMC-1 with the handy flip port, this set up quickly became my favourite choice of the lenses I had tried and I didn’t even bother with different lenses after that.  For Lembeh, the 12-50mm was the perfect choice as there are so many different subjects to shoot from big to small!  With an SLR I always concentrated on one lens, but with this set up I could take great photos of every subject that I came upon.  In short, I really liked it! 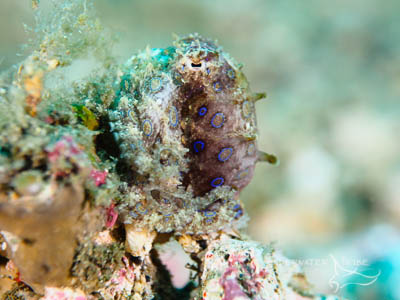 SMC-1 was easy to use with swing arm

Overall, I had a better experience with the Olympus setup than I did with the Sony, however, I am really comparing apples to oranges here as I didn’t actually try any other lenses with the Sony other than the Nikonos 15mm.  I am quite sure if I spent more time with the Sony and used comparable lenses I would have had similar results.  However, of the two cameras I was more favourable to the Olympus and I am quite inclined to buy one for myself in the not too distant future.  Looking at the images on a 27 inch screen shows that they are just as sharp and clear as an SLR and I could sell images from both the Sony and Olympus with no problem as the quality is very good.  The only downside I see of the Olympus is the strange (to me) ratio of the resulting images as I find the 4/3rds size to be squarish looking when compared to the ratio of an SLR camera and it leaves me with the sense that the photos have been cropped without locking in the ratios, but, that could just be me!