Before our recent Underwater Tribe/NAD Lembeh Photo Workshop, I decided to head to NAD Lembeh Resort in order to try a few new things in my diving life.  After a few days spent learning the ins and outs of Closed Circuit Rebreathers with the Poseidon Mark VI CCR, which is taught exclusively in Lembeh Strait by Simon at NAD, it was time to take some photos.  I decided to take advantage of Simons rental camera selection to try a few “new to me” setups while I had a few days of free time.  In fact, I didn’t even bring one of my own SLR housings, as I wanted to put these systems through a proper test and not give up mid way through and go back to my own trusty gear.  The rental systems that NAD had available for me (and for anyone interested in renting a camera while there) are a couple of the latest and greatest mirrorless cameras:  the  36 mp full frame Sony A7R and the Olympus EM-1, both with Nauticam housings.  I also rented two Inon S-2000 strobes to complete the desired “small” system that I wanted to familiarize myself with. 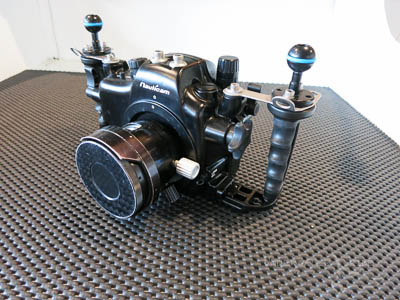 First up was the Sony A7R, which we paired with the legendary Nikonos 15mm lens, this system garnered a lot of press when it was first launched as the Nikonos lens is still considered one of the best ever wide angle underwater lenses due to its small form factor and great optics.  As someone who used the Nikonos V and 15mm combination for many years and thousands of dives, I was very intrigued by this new digital 15mm hybrid as I loved the 15mm with film because it was such an effective lens.  My goals were simple really: 1 – to see how the CFWA capabilities of the 15mm would compare to a modern SLR with a fisheye and teleconverter combination.  2 – see if the system was effective by being able to set the focus of the camera to a preset distance and be able to quickly capture sharp images.

Upon first inspection, this combination was certainly larger than a Nikonos V but was also smaller than an SLR, a plus for close focus images.  One of the first benefits of this setup that I noticed right away was the fact I could compose through the lens of the 15mm, whereas this lens only had a parallax viewfinder for use with the film version.  Being able to actually see the frame of what you want to compose is obviously a huge benefit!  One of the issues of this combination that I was expecting is the fact that the 15mm is a manual focus lens, so, there is no real way to tell if it’s actually in focus.  There is a “work around” for it as the Sony has a system of “coloured highlights” that can be activated on the screen to theoretically show what is in focus, however, the effectiveness of this system is not all that accurate and I never did trust it.

Can’t get too close with CFWA

As I was in Lembeh, the close focus opportunities were abundant and varied with subjects such as octopus, common seahorses, snake eels, and other fist sized or larger animals easily found.  What intrigued me about the 15mm and mirrorless camera combination was the small size of the lens itself which would provide an easy way to aim the strobes without a bulky dome port getting in the way, common with an SLR housing.  This did prove to be true, as I was easily able to position my strobes without having any shadows intrude into the photos.  However, what was disappointing was the distance I had to remain from the subjects to get sharp focus.  With the Nikonos V and 15mm combination a working distance of 15cm was about the minimum focus distance, and this was also true of the Sony and 15mm combination so I shouldn’t have been surprised.  However, after working with a fisheye and TC for so many years, with a 2cm to 3cm minimum focus distance, the Sony combination was not satisfactory for smaller subjects such as seahorses. I kept catching myself trying to get closer which of course ended in out of focus results. 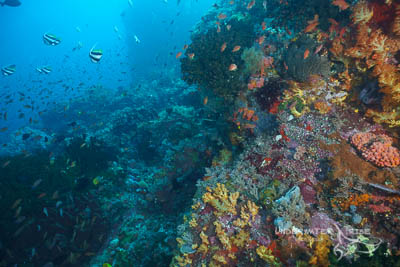 On the second day of using this system, we headed out to the northern end of Lembeh Island to dive at some of the “classic” wide angle dive sites that offer stunning soft corals and seafans.  These photo opportunities were more inline with what I used to shoot with the Nikonos and I hoped taking these types of photos would prove more satisfactory than the CFWA ones did.  The “sweet spot” of the 15mm lens for general wide angle work is to set the focal distance to midway between 2 and 3 feet and the fstop midway between f5.6 and f8, this allows the lens to focus from about 30cm to infinity and is the setting I used for the vast majority of photos of such things as seafans and people shots with a Nikonos, and so I set it the same for the Sony. The Sony offers a wider variety of shutter speeds to work with as the Nikonos only synched between 1/30 and 1/90 with strobes (it can be set at 1/125 or higher but it only fires at 1/90 regardless).  My hopes were higher for this style of wide angle photography with the Sony/Nikonos combination and my hopes proved to be correct, my percentage of keepers were quite high compared to the CFWA photos I was shooting the day before.

Everything that I shot between 1 to 4 feet proved to have sharp focus and brilliant colours, I was also very happy with the corner sharpness in these photos.  Corner sharpness can often be terrible when using a DSLR, with both fisheye and rectilinear lenses, especially at fstops less than f11.  The ability of this camera setup to shoot “from the hip”, without waiting for the autofocus to catch or having to “dial in” manual focus, was a definite advantage, especially for larger subjects.  I can certainly see this as a great combination for larger, fast moving situations such as feeding mantas, great white cage diving, whale sharks, whales, or baitball action. 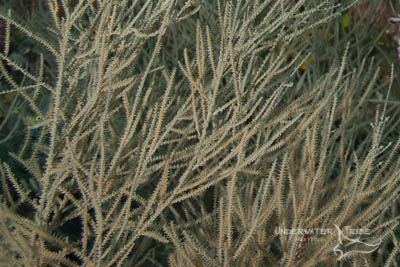 Close up of the bottom left corner of the previous shot, very sharp

Overall, I found the Sony and Nikonos 15mm combination to be an interesting wide angle option but it wasn’t something I was “itching” to try again and again.  Although the sharp corners and quick shooting capabilities were a definite plus, the lack of being able to see exact focus and the 15cm minimum focus distance were negatives that put me off the system.  I would certainly consider it as a great option for fast moving subjects and in situations where smaller cameras are a plus, but the considerable cost of the camera itself means that it would be a very expensive “second camera” for most people.