I am a big fan of octopus, I would willingly spend an hour with a curious octopus watching it go about its daily life, combing its environment looking for food and avoiding predators. The species of octopus doesn’t matter; they all seem to have an innate curiosity of their surroundings and will often interact with a diver who moves slowly and carefully. 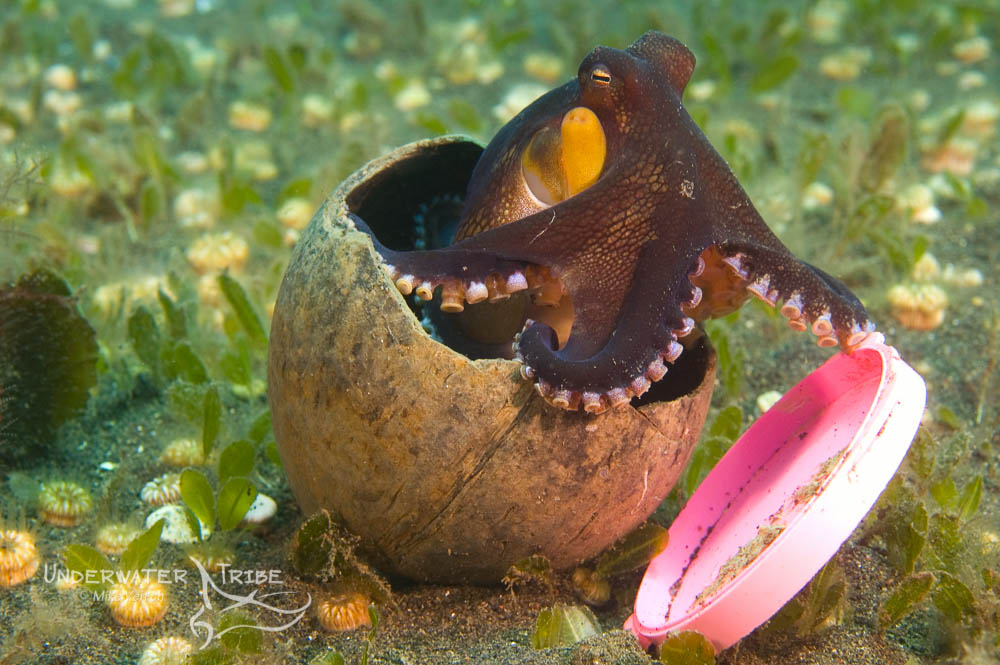 One of my favourite octopus encounters was with this coconut octopus during a dive at Puri Jati (PJs) in north Bali, Indonesia. Coconut or veined octopuses, Amphioctopus marginatus, have recently been designated as the first invertebrate able to use tools, elevating their status as an intelligent animal. On this dive, I encountered this guy in less than 5 metres of water and was able to spend a long time watching and photographing his/her daily life. The first thing that stands out in the photograph is that the octopus is obviously using the coconut shell as a home (hence the name) but that the “roof” of the house is a bright pink plastic cap! This photograph pretty much sums up the intelligence of these animals and lends credence to the idea that they can use tools. Not finding a suitable shell to use a “roof” to close up the shell when threatened, this octopus was able to substitute the next best thing it could find. Thinking I would help out this little guy and find it a clam shell to use instead of a piece of bright pink plastic, I found a big clam shell and brought it over, but when I set it beside the octopus it showed no interest whatsoever!  He/she was more than happy with its bright pink roof and just picked up its shell and trundled away!

Story Behind the Shot – Shark Parting the Red Sea

As Discovery Channel is continuing to run “Shark Week” this week, I will continue my shark theme here as well! 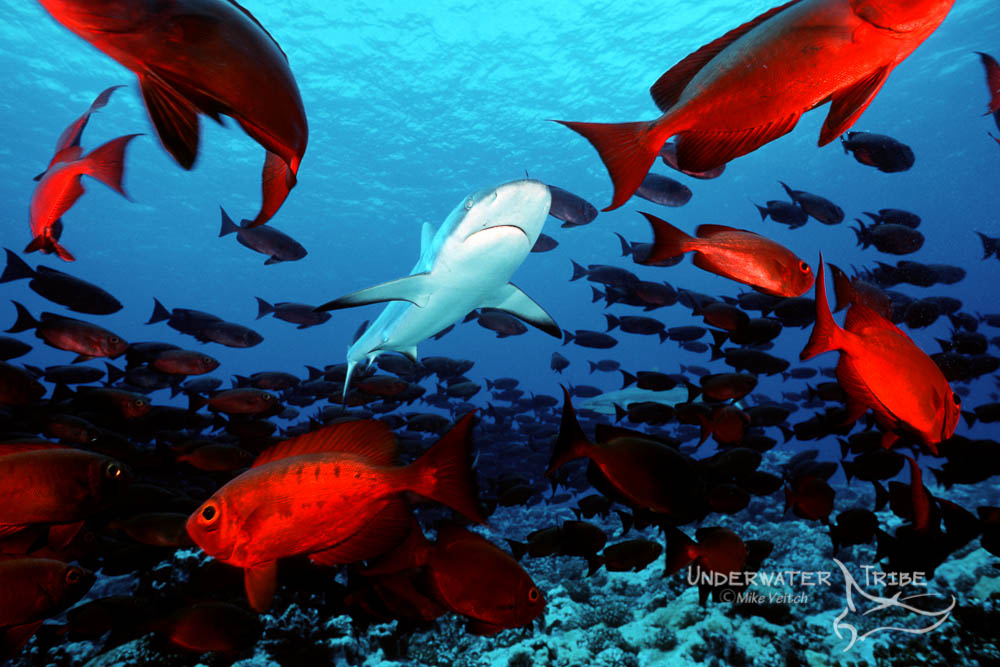 Most photos that you see of sharks don’t hold a lot of colour but instead feature a greyish/blue shark against an otherwise empty blue or green water background.   Not that there is anything wrong with that, in shark photography less is often more and it’s the shark itself that truly captures the eye when looking at a shark photo. However, for myself I always took it as a challenge to capture a photo of a shark that was a little bit different. This photo is one of my personal favourite shark images, as the bright red school of “bigeyes” really makes the image pop, its not just another photo of a grey reef shark. This shot was taken in the Tuamotu Island chain of French Polynesia on a spectacular “pass dive” on the island of Toau. On this site, the dive plan was to jump in the water in the open blue and then drift toward the mouth of the pass until reaching the reef, where an incredibly diverse population of sharks rides the incoming current. The list of sharks that I have encountered in this area reads like a divers top ten list, including silver tips, grey reefs, black tips, white tips, nurse, lemon, and the occasional silky or hammerhead. After watching the sharks at the mouth of the pass, we would then drift with the current down the channel until coming upon a large cut running perpendicular to the pass, lovingly called the “Wrasse Hole”. A resident school of big eyes was always present in this cut as they were able to shelter away from the strong current. Displaying the brains of the smart predators that they are, a second set of resident sharks also lived in and around this cut, patrolling the area ready to pounce upon any sick or injured fish. On this particular photo, I was able to duck down into the school of fish and “hide” myself from the skittish sharks by breathing slowly and staying still. After patiently waiting for a shark to come toward me, I then “popped” out of the schooling fish and captured this shot, “Parting the Red Sea”

As part of a continuing series of posts, the “Story Behind the Shot” are short discussions about photographs from my library highlighting interesting photos or events from 15 years working full time in the diving industry.

Story Behind the Shot – The Grey Reef Shark 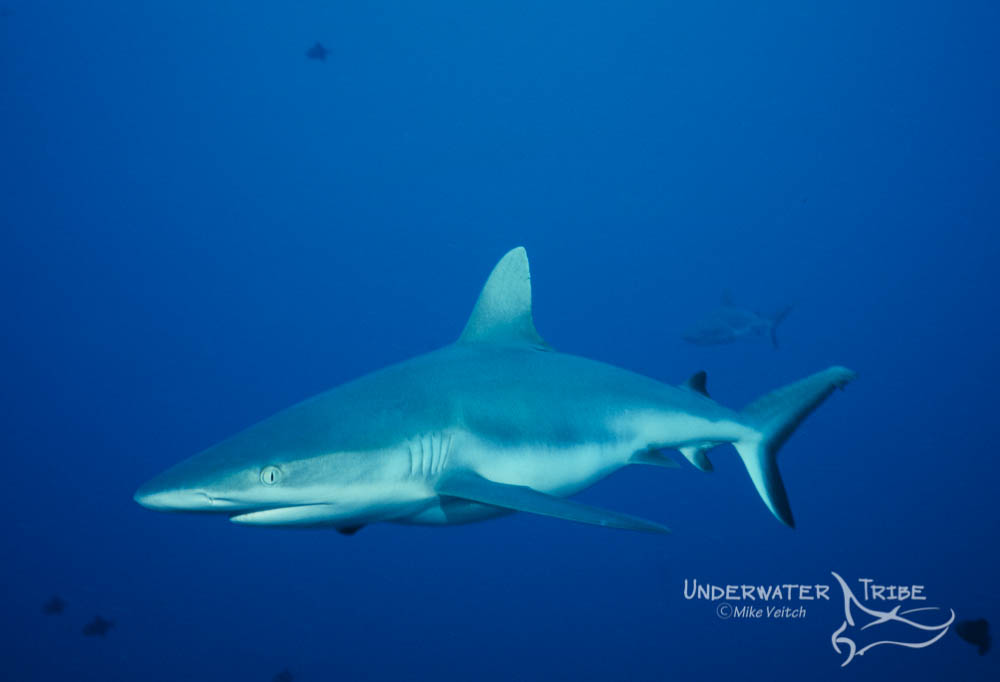 Now this shot might not look like the most dramatic photo of all time, and I am not posting it here as an example of such, but rather I am posting it as an example of the changing times in underwater photography.  This was taken at either Blue Corner or New Drop Off in Palau circa 2000-2002 and was shot with a Nikonos V and 20mm lens.  Those two dive sites were incredible places to dive when I worked in Palau from 99-2002 and from all accounts that I hear these days, still are great sites with loads of fish action.  There really is no feeling to compare to hovering over the edge of the drop off with 15 or 20 sharks parading past you while huge schools of fish fight for position in the current.

Looking over some older photos in the last few weeks has opened my eyes to what I shot then compared to what I can shoot now.  This was most likely shot with Fuji Provia 100 film, but I am not sure as I don’t have the slides with me, and I couldn’t say what the settings were, maybe f5.6 and 1/90?  Tough to tell when there is no metadata attached!  For digital photographers out there, could you imagine not being able to change the ISO during a photo shoot?  When loading a roll of 36 into the camera in the morning, I was stuck with that ISO film until I finished the roll, so, if all of a sudden I was down deep and the conditions changed to green and overcast, I was still stuck with that roll of film; nowadays, if the conditions get too dark I can just change my ISO on the fly, simple.  Also, although many images looked great on film, scanning them into digital never worked smoothly and took a LOT of extra time to get rid of any dust or scratches.  I don’t miss that at all!  Another thing I don’t miss?  Going down with a roll of film that had only 10 or 12 shots left on it and having an epic dive and running out of film in the first 15 minutes, that doesn’t happen in digital.

What I want now is the chance to spend another 5 years in Palau and French Polynesia reshooting everything I shot back then but with digital!

My latest article with Dive Advisor on their Sub2o blog is now out!  In the article I discuss how jetties and piers are very under rated for both divers and underwater photographers.

Here is an excerpt:  Piers and jetties often get a bad rap when it comes to divers, since many don’t show much interest in exploring docks at all. The most common excuses tend to be entanglement hazards from fishing lines, the potential for trash in the water, or the dreadful feeling of claustrophobia from being underneath a large object.

Follow the link to read the full article and photos

Jumping Off the Jetty – Sub2o Blog 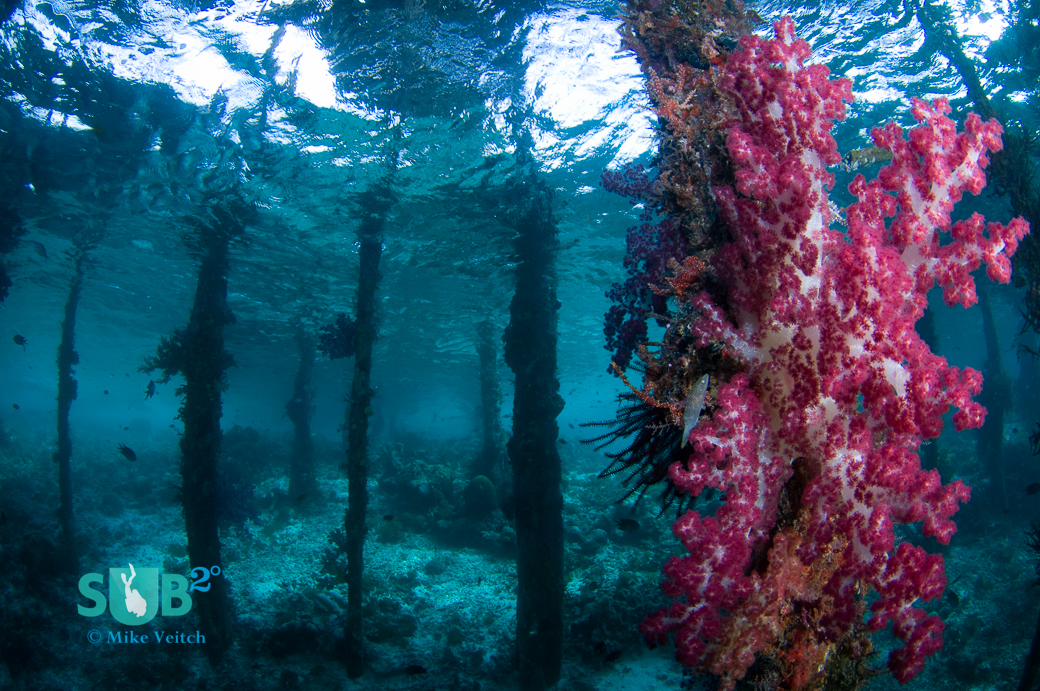