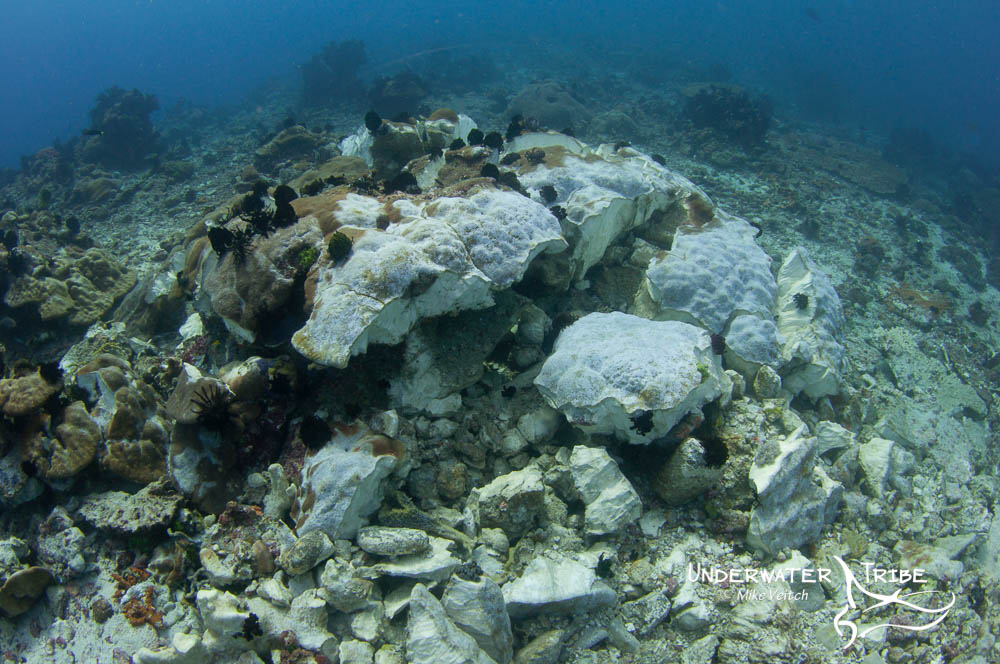 This is my second “Story Behind the Shot” that talks about coral reef destruction by illegal fishing methods such as dynamite fishing (my first one is here, an encounter with a bomb that didn’t explode). This photo is of a very large stony coral head that has literally been blow to pieces by a home made bomb thrown by an illegal fishing boat. The practice of “dynamite fishing” is as simple as it sounds; a fisherman creates a “bomb” with the main ingredients of fertilizer and diesel or kerosene and sets it off with some sort of detonater. It may sound like a basic little device but just look at the Oklahoma bombing from a few years ago (that brought down a huge building) using the same method. On this particular shot, we had arrived at our diving spot (an offshore pinnacle) to find a lone local fishing boat anchored to the spot. As the fishermen didn’t look active, and saw us coming, we prepared to jump in on the spot for an early morning dive. Before leaving the main boat I did find something a little strange, several dead fish were floating past the boat on the surface. I pretty much knew that this meant these fishermen had been doing some dynamite fishing but didn’t realize the extent of it before I jumped in. I had a camera with me during the dive set up with a macro lens as the conditions didn’t seem all that great for wide angle and I set about looking for small things along the mini wall. As the dive wore on and I was approaching my shallow safety stop I could see a lot of “white rocks” in the distance that looked a little strange. As I approached these white rocks I started to see a lot of dead fusiliers littering the reef, this gave me a sudden sense of trepidation of what I was looking at in the distance. Sure enough, as I got closer I could see that it was an entire large coral head that had been blown to smithereens by bomb fishing. I was most definitely flabbergasted by the destruction and was lamenting the fact that I had a macro lens on as I wanted to capture images of the immense destruction to show anyone who would pay attention. After taking a few shots of the dead fusiliers I headed to the surface and went back to the main boat to change lenses. Once putting my wide lens on I headed back to the scene of the crime and took a series of shots of the carnage, I believe this photo best captures the widespread damage. However, no one photo could also show the amount of dead fish that were spread all over the bottom, fish that would never be collected by the fishermen as they only scoop up the fish that float to the surface. In other words, I was a witness to a shocking example of what a complete waste of life dynamite fishing is. Not only do the majority of the fish killed by this method go to waste but it completely destroys the environment they live in and creates an area devoid of life. What a waste!