I am a big fan of octopus, I would willingly spend an hour with a curious octopus watching it go about its daily life, combing its environment looking for food and avoiding predators. The species of octopus doesn’t matter; they all seem to have an innate curiosity of their surroundings and will often interact with a diver who moves slowly and carefully.

One of my favourite octopus encounters was with this coconut octopus during a dive at Puri Jati (PJs) in north Bali, Indonesia. Coconut or veined octopuses, Amphioctopus marginatus, have recently been designated as the first invertebrate able to use tools, elevating their status as an intelligent animal. On this dive, I encountered this guy in less than 5 metres of water and was able to spend a long time watching and photographing his/her daily life. The first thing that stands out in the photograph is that the octopus is obviously using the coconut shell as a home (hence the name) but that the “roof” of the house is a bright pink plastic cap! This photograph pretty much sums up the intelligence of these animals and lends credence to the idea that they can use tools. Not finding a suitable shell to use a “roof” to close up the shell when threatened, this octopus was able to substitute the next best thing it could find. Thinking I would help out this little guy and find it a clam shell to use instead of a piece of bright pink plastic, I found a big clam shell and brought it over, but when I set it beside the octopus it showed no interest whatsoever!  He/she was more than happy with its bright pink roof and just picked up its shell and trundled away! 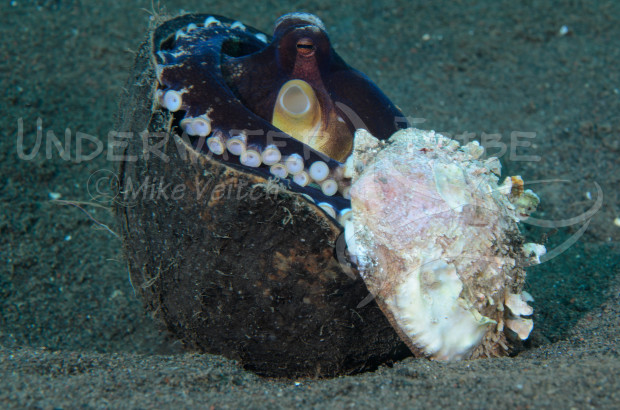 One of my favourite inhabitants of the underwater world is the octopus.  Non divers may think of octopus as just “octopus?!?!” an item they see photos of from time to time or else as some sort of culinary item (not recommended!) However, to the well informed people (by this I mean those of us who scuba dive 😉 ) octopus are one of the most sought after encounters to be had.  These long legged mollusks are one of the most intelligent “non mammals” on the planet and an encounter with one is always a treat to any diver.  Having the opportunity to sit and watch one of these wily critters is always fun, especially if the octopus in question is up to something (hunting, house building, general tomfoolery such as attacking cameras)

In Bali, one of the best places to encounter octopus is the dive site Puri Jati (also known as PJs) which is located on the north side of the island, not to too far from Lovina.  The species which can be found here are some of the most sought after for underwater photographers:  mimic, long arm, and coconut octopus, I won’t bother with the scientific names!  Last week, I was in north Bali teaching an underwater photography class with a student who was learning both wide angle and macro photography techniques.  However, as part of his class he wanted to have a day in between so he could practice techniques without me, no problem I thought, I will go diving!  So I did, and am I ever happy I did that.  I took a wander down to Puri Jati and jumped in for two dives, a total of close to 200 minutes with a max depth of about 10 metres (30 feet) in nice warm water.  It turned out to be a very octopussy sort of day, with 7 different individuals of 3 different species with half of them being “players”.  The best two encounters were with a small mimic octopus and a large coconut octopus who were dueling for my attention.  The coconut had a great home that he was transporting around (coconut shell and clam shell) while the mimic was out for a jaunt and poking his tentacles into every crevice looking for a meal.  I spent over an hour just watching and photographing these two individuals and came back with some fantastic photos.  I have posted one here, but the others are a part of another project so can’t be posted quite yet.